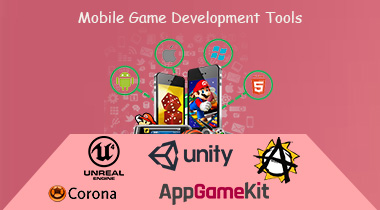 Mobile game app development has made a breakthrough progress in the last few years. The ceaseless crowding of new mobile devices and OS’ presents a constant challenge for game developers to build something better and greater with every game app they develop. A developer has to incorporate the right tools to make a successful game application. Below are the top 5 game app development tools to benefit from:

Unity – a cross-platform game engine created by Unity Technologies is used to develop video games for consoles, PC, mobile devices, and websites. Unity is all-in-one software as it offers every feature for an entire game development cycle in one simple program. With these provisions, it has also acquired Tsugi (a cloud-based development services). This service can be used with other Unity purchases and predictive analytics which equip Playnomics embedded in this program. The features of Unity are scripting with C#, Boo or JS; optimized graphics; one-click deployment; life-like animation; 2D physics; native code plugin support; native audio plugins, etc.

This tool can be used by both experienced and amateur developers, however, developers can also code in C++ if they like. This tool has its own BASIC script language and enables developers to write code for their game once, and implement it across multitudes of mobile phones. The different features of App game kit include: device independent; code in BASIC C++; 3D & 2D Graphics.

This tool is still in alpha mode but is expected to get promoted by Stream Greenlight shortly.

This tool is mostly used to develop 2D games and other mobile apps. Hence, it is classified as major iPhone game development tools as well as android game development tools. This tool has more than 500 different functional APIs that can be utilized from networking to animation. This tool is developed in a link with other programs such as OpenGL, OpenAL, Box 2D, Facebook, and SQLite. It also makes use of Lua coding language for development. Over 2500,00 game developers have used Corona SDK – a unique cross-platform tool that is fast, versatile and easy. Developers can develop 2D games and apps for mobile, TV, and desktop. It enables super-fast development – 10x faster than other platforms.

This tool is used for end-to-end game development built mainly for mobile devices. It is a complete C++ mobile game engine and toolkit that allows the developer studios of all sizes, hobbyists and students to create immersive game content across any genre and deploy completely for free on iOS, Android and Tizen platforms. Latest updates include asset manager, FBX files in the automatic script validation, particle lighting support for the personal computer, and a higher-quality combination for FMOD and Scaleform.

When it comes to developing your game development ideas, ensure that you are connected with the right partners. Mobile app development India has a team of skilled game app developers which strives to deliver exceptional mobile game apps for your game app ideas.