A Sneak peek into the Core Features of Galaxy Note 7 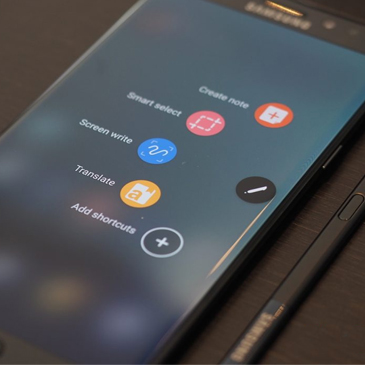 Keeping with the growing popularity of Android devices, Samsung recently launched its latest phablet Galaxy Note 7. The phablet draws inspiration from the company’s popular handset Galaxy S7 Edge in terms of curved screen and design cues. The phablet maintains its large size, comes with an additional security layer and also has a stylus.

The Note 7 phablet is largely based on S7 phone series of Samsung which have AMOLED display. The curved edges and the 12 megapixel rear and 5mp front camera add to the functionality of the phone. It has a memory of 4 gigabytes and a 3500mAh battery which enables fast charging. The note also possesses the capability of being dust and water resistant.

The Note 7 phablet has two unique features. These include the iris scanner and stylus. The Note range has been popular because of the S Pen. The Note 7’s S Pen possesses the capability of working even under water.

Although the latest Note 7 has features of both the S7 and Note 7 series, it does have some differentiating features. The phablet’s iris scanner combines with the fingerprint scanner and allows users to unlock the phone with their eyes. The unique feature is believed to be more secure than the fingerprint scanner. The scanner can effectively be used for locking content in secure folders, notes, photos and apps. The locked content remains separate from the other data stored in the phone.

With the new launch, Samsung has focused on satisfying the requirements of S7 Edge. The handset boasts of creativity, updated software and design excellence. By launching the phablet, Samsung aims to capture the phablet market and at the same time maintain its market share in the smart phone category. The latest Note 7 with its unique features definitely promises to be a boon for Android app Development. The features will enable developers to develop user friendly and functional apps.