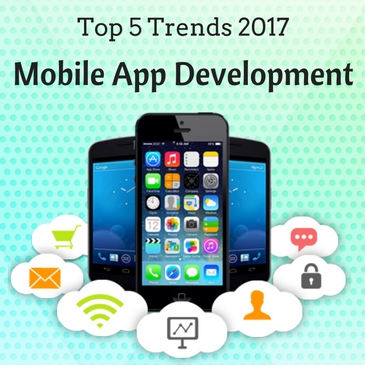 According to a recent survey, revenues around the globe are envisioned to grow astoundingly (for about 962.5%) between the years 2011 to 2017. Not to mention the towering use of applications in the existing markets as well as the advent of new markets, it is predicted that by the end of the year 2020, the mobile app industry will flourish to a gargantuan $100 billion industry. Google Play store and iTunes collectively have more than 4.3 million mobile applications and to meet the user’s requirements the development procedures and methodologies are constantly evolving. That being said, let’s look at some latest trends in mobile app development for 2017.

Location based services will emerge in the forthcoming years as GPS is easily available on almost all mobile devices today which provides end-users real-time information or details based on their locations. Some of the major areas where GPS can be used extensively are military, navigation, mapping, location-specific payment portals, security aspect, travel, and tourism, etc. Along with the mammoth investment in the LBS sector by the top tech giants, Beacon technology is also gaining popularity. Also, you can add the aspect of Augmented Reality in the GPS trend. According to a report, mobile app developers are getting increased number of projects based on GPS system (navigation/location-tracking). The latest example of this is the much talked about Pokemon Go game. Over time with the emergence of many AR based apps and the addition of wearables, AR tools could be used more effectually and lucratively.

Google’s Instant Apps feature was announced recently and it facilitates Android Apps to run spontaneously. This kind of apps could run with just a single tap and you do not require downloading or installing them. Suppose you are conducting a search for something in general, then you would be able to find a related app regarding your conducted search in the results page and you can run that app without even installing it. No need to use the data to install it or the wait for it to download or use the phone memory to store it. These apps are ideal for a quick visit and experience and are generally the preview versions of the applications.

There will be about 6.5 billion connected devices globally by the end of the current year and by the end of 2020 it will rise to 28 billion. The IoT industry is amidst a remarkable flare at this moment, and applications that take into account IoT and incorporate the best will emerge outstandingly. Enterprises in the sector of education, health, smart homes, automobiles, security, etc has begun exploring and incorporating with IoT development. Profits and returns from the IoT sector are already pitching high and is expected to show a bifold increase in the figures in the coming twelve months.

With the development in the mobile industry, the security threat to sensitive data has also multiplied. App developers need to prioritize the in-built security features either at the API level or at the time of accessing the app itself. Apple at WWDC (World Wide Developer’s Conference) announced that by the 1st of January all iOS applications will have the robust App Transport Security or ATS obligatory. On the contrary, Android platforms will continue to be slightly dubious. In 2017, it is expected that security features will become the crux for all the application developers.

The Android vs iOS fight will continue

The never ending competition between Apple and Android is expected to continue in 2017 also. In the market share department, Android is leading considerably than Apple whereas in terms of developer’s returns Apple leads the race. Moreover, iOS is nonetheless way more productive than Android. In addition to this, it is contemplated that in the mid-2017, Android will overtake iOS in terms of gross revenues in the gaming sector.

Well, whatever be the growth rate of any enterprise, the supreme user experience is the key reason behind the success of any particular application. Our company Mobile App Development India provides various Android and iOS application development services in accordance with the evolving technology. All in all, it remains to see what 2017 will have in store for us.