Top 8 features you need to know in the new iOS 10.2 version 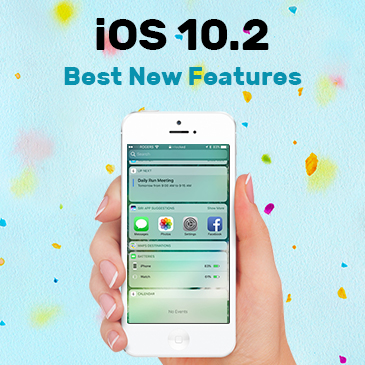 With the recent launches of iOS 10, iOS 10.1 the new addition to the iOS versions, i.e. 10.2 is going to be introduced in the month of December. But before that the beta version gives us a glimpse of what the latest features will include and what are the bugs that need to be resolved.

An extension in the pool of emoticons is one of the new features of iOS 10.2. Almost 72 emoticons will be added to your iPad or iPhone keyboards. The new emojis are sick faces, clown face, drooling face, fox face, owl, butterfly, avocado, shark, pancakes, croissant, novel professions including both mean and women, a selfie arm and so on.

The prime feature of iOS 10.2 is the new TV application. It acts as a content navigator to assist end users to explore new subject matters and decide on what to watch. It will be accessible for the Apple TV as well as iOS devices. It would support Siri Live tune-in and Single sign and also a store for procuring TV subscriptions and iTunes content.

According to the pre-release notes, on tapping the power button for five times, the SOS feature will automatically call the emergency services. This attribute works in countries like The United Kingdom, The Unites States of America, China, Japan, Australia, Belgium, Brazil, Canada, France, Hong kong, Italy, India, Russia, Spain. You can activate or deactivate this feature from the settings application under the General unit.

In iOS 10.2 there is a cool new feature “preserve settings” in the Camera application. This means that when you reopen or relaunch the application, the settings which you chose previously will be remembered and you can resume snaping or recording straight away where you left off (i.e. you can pick up where you left off).

Unlike the previous iOS versions, in iOS 10.2, the Repeat and Shuffle buttons available in the music application are more exceptional. You don’t have to swipe the screen down to use that function instead they would be easily visible now.

For iPhone 7 & iPhone 7 Plus users, iOS 10.2 will provide background options (i.e. for your home screen and lock screen) to choose from. The wallpapers consist of water droplets in blue, pink and yellow colors and on selecting the perspective option, the droplets will move along with the movement of the device.

There is a new feature in iOS 10.2 named “celebration”, where your recipient’s screen will be filled with sparklers.

Another new widget in iOS 10.2 which enables you to play movies, TV shows or videos saved in the video app. You just have to tap on any of them to start viewing them.