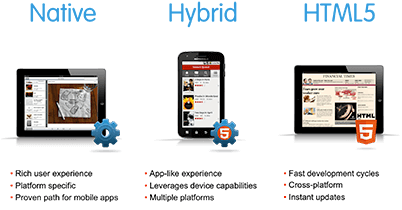 Top mobile app development India uses the Xamarin platform for developing mobile apps. The launch of Xamarin 2 has made it the leading solution provider for cross platform apps development. Its partnership with Microsoft has also motivated app developers to make use of the platform.

This is the most popular cross platform app developing platform. The tool is owned by Abode and uses the Apache Cordova project as an open source. Its popularity can be attributed to the fact that it is free to use. Enterprise version of the PhoneGap will soon be launched.

This is a cross platform app platform that focuses on enterprise. It allows Mobile Application Development India developers to write JavaScript using the Alloy MVC framework. JavaScript is commonly used by developers and hence it saves time that may have been wasted in understanding unfamiliar codes. For enterprise customers, Appcelerator also offers the option of virtual private cloud. It also consists of dedicated infrastructure, monitoring, performance management and analytics features.

The iFactr is commonly used by enterprises who wish to build quick apps for their workers. The platform basics are very simple and easy to understand. It is commonly used to create prototypes that can be used and tested by employees. iFactr uses Xamarin for compiling Android and iOS apps and for successful iPhone app development. PhoneGap is also part of the tool.

The 3.0 version of SAP was launched recently which aims at eliminating the complex procedures of the earlier versions. Using the SAP, mobile app developers can build cross platform apps for enterprises using single HTML5 codebase.

Mobile app development is undergoing a phenomenal change. The various new platforms and tools can help developers develop apps that are easy to build and high on the functionality quotient. There are many more similar tools that facilitate mobile app development.