What is the future of Android Instant Apps? 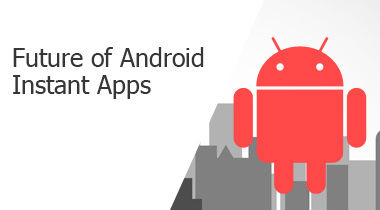 Google during its I/O developer conference in May 2016, declared the arrival of Android Instant Apps. Google’s new Instant Apps are flexible and convenient but would be limited only to mobile browsers for the moment. Users can run a version of a mobile app on a mobile even if the native app is not installed on their smartphone. These Apps characterizes a huge shift in the way apps are handled as well as the number of apps you might have on your phone in the coming future. Users without having to download any particular app on their mobile device can access specific elements of that app.

How do Instant Apps work?

Using Android Instant Apps, users can access any particular element of an app to get directly to the functionality or service they need, and the plus point is they don’t have to install the entire application.

For example, say an e-commerce brand provides proximity feature which lets the users find the products they want to buy in the store through the app. With Nearby Notifications, the users can launch the app in an instant and find products to buy without installing the shopping app.

Developers have to modularize their applications so that users can access and download the one singular segment of an app that is required. Google has displayed Android Instant Apps accessed through a web link, Google search, and NFC.

How are the Instant Apps useful?

Some activities would get simpler as well as quicker with Android Instant Apps. You don’t have to download or install unessential apps that you use only once or twice. This will help in saving a lot of storage space by making sure that you don’t clutter up your internal memory with useless applications.

Moreover, Android Instant Apps will make many actions quicker, such as finding recipes or paying for the parking spot. It is in the initial development stage, but with time, it could certainly change the way we utilize our mobile phones.

This will methodize activities to just a few taps, whereas presently, one has to download an app, install it, navigate to find what one want which is without a doubt is more than a couple of clicks.

Google stated that Android Instant Apps would be supported on Android devices having Jelly Bean version and above. Thus, it is not for new devices yet.

For now, only four apps i.e. Buzzfeed, Periscope, Viki and Wish are accessible on Instant Apps platform. The apps available on Instant Apps will be identical to mobile apps with regards to visual appearance as well as its functionalities. For example, when Periscope is opened on a mobile browser, one can access its features like comments posting, live streaming and expressing likes or dislikes, through the browser only. This will eliminate the need of downloading multiple apps on a mobile device. If these functionalities get implemented over multitudes of applications, then beyond any doubt these Instant Apps would incredibly revolutionize the Android app development division.

Read About: How can Android app Development be the essence of your business?